Aida and the moon

By dklar September 28, 2010 Insights
No Comments 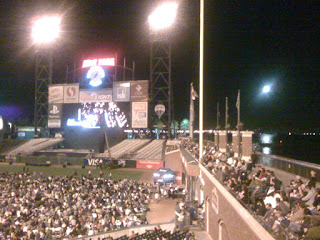 Friday night was a magical experience. One of those nights that almost seemed choreographed and that makes you say a little prayer of thanks to be able to live in San Francisco. I attended, for the first time, the SF Opera simulcast at AT&T Park.

I had never heard of this annual event, but apparently I’m in the minority since 32,000 people showed up to fill the stadium and experience Verdi’s Aida. Four friends and I filled bags with baguettes, cheese, roast chicken, melon and more and hoofed it down to the Park. The weather was spectacular all night; our seats were perfect; we watched the full moon rise over the east bay hills and sparkle on the bay. And then the performance began.

I’m no opera buff, and frankly am not convinced that I would be able to keep my eyes open for 3 hours even in a front row opera house seat, but Friday night I was glued to the ginormous video screen. (yes, ginormous is in the dictionary – I just googled that too.) Aaron Saenz writes an interesting article (with video) about what it means when opera goes to the ballpark – the energy of the crowd that entices us to experience art together. That is what I felt… a wonderful energy not only from being among 32,000 opera fans, but from the warm acknowledgment of us, the virtual audience, by the artists themselves.

The conductor bowed to the camera (us) before the performance. The introduction included the usual request for opera house attendees to silence their phones and for the thousands of stadium viewers to “do whatever they wanted.” The singers came out for their curtain call wearing Giants t-shirts or waving orange foam fingers.

Quite an amazing “cross cultural” experience and a magical mix of media. Oh, and the best part (besides the music, the food and the view)… it was free.