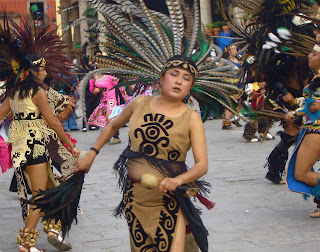 I’ve heard it said that not two weeks go by in San Miguel without some kind of festival or celebration. I’ve only been here less than a month but so far it’s holding true.

This week marks the anniversary of the birth of Ignacio Allende, one of the leaders of Mexican Independence, who was born here in San Miguel on January 21st, and for whom the town is named. Festivities began with a dance festival in the Jardin. A latin combo played cuban salsa in the gazebo while couples danced; a mexican brass band blew tunes in front of the Parroquia; Aztec dancers stomped and twirled next to the garden; people dressed as clowns, queens (not the royal kind) and various comic characters shook their booties to something resembling reggaeton; and local dance school kids performed exhibitions from cumbia to the twist to a painfully cute rendition of the machete dance by a group of 5-year olds.

And all of this was going on at the same time! Total Mexican cacophony.

The evening became a bit more focused, with a wonderful outdoor symphony concert next to the Parroquia featuring the Mexican Army chorus. Me and 300 other people sat under a starry sky listening to greatest hits from Shubert, Verdi, Bizet, etc. with a singalong to Cielito Lindo at the end. (I finally learned the words). I hear that Wednesday features a military parade through the streets (and given that the mounted police here wear traditional colonial uniforms, I’m expecting a visual treat).

Tomorrow’s my birthday, though happily fully eclipsed by the inauguration. A true reason to celebrate. What a week!