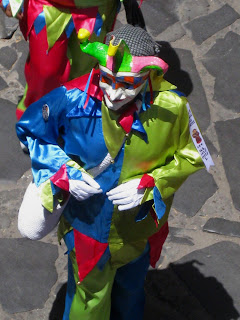 Yesterday I spent the afternoon observing one of the most popular and colorful fiestas in San Miguel – Dia de los Locos – day of the crazies – in honor of Saint Anthony of Padua, patron saint of lost things. It’s really best described as a cross between Mardi Gras (without the puking), Halloween, and maybe the Gay Pride parade (without the nakedness).

Thousands of families line the parade route, while thousands more dressed as birds, cartoon figures, animals, aliens, drag queens… you name it, dance behind truck floats or bands blaring music, and throw handfuls of candy at the crowds. We dodged flying candy from the balconies of our almost-renovated dance studio on Hernandez Macias. It was amazing.
For a visual tour of the parade, see my pix on Facebook.
For a little history, here’s a nice excerpt from Gorden Jett’s article in MexicoFile…

In the 17th and 18th centuries Catholic priests introduced San Pascual Bailon as the patron saint of field workers and kitchen workers. The newly converted Mexicans celebrated his “day” on May 17 by decorating themselves with tools and other symbols of their labor and dancing to the sounds of pagan flutes and drums.

To keep the paraders and observers separated, some paraders were dressed as scarecrows and their characteristic movements were described as “loco,” i.e., crazy. Somewhere along the way, paraders dressed as clowns replaced the field and kitchen workers, though the music and the dances stayed the same.

San Antonio de Padua’s day was celebrated on June 13th and it had its own dances. But the dances of San Pascual Bailon were so popular that they were also used for San Antonio’s celebration. Gradually the two celebrations melded and are now celebrated as one on the first Sunday following June 13.

Nowadays, neighborhood groups or groups of workers join together to make elaborate special costumes. Some ride on the back of trucks decorated as floats and some march the route. Almost all have bands or recorded music which competes in a glorious cacophony that is so characteristic of Mexico. Early on, the marchers handed out pears to the people along the parade route, but now each group throws candy into the crowd, causing even more noisy mayhem.