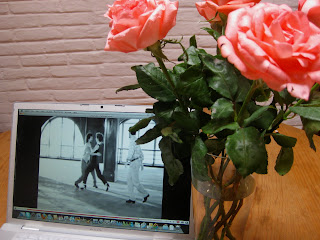 Every Friday night at the dance studio where I’ve been taking lessons, we have a dance party where all the students and their guests show up to dance or just to watch and have drinks. Two days ago during my lesson, Christy, the owner suggested that since the following night’s party would be my last, I should do a tango demonstration to show how much I’ve learned in the last few months.

Now, you have to understand that from the age of 6 to 12, I took ballet lessons and managed to avoid ever being in a recital. In fact I quit ballet and never took dance lessons again, much to my mother’s disappointment, because I was TERRIFIED of performing. So here I am dozens of years later feeling pretty much like I did when I was 12. No pressure.

Last night, in the middle of the party with about 50 people, Christy turns up the lights and gathers everyone around to announce that it is my last week, what a dedicated student I’ve been and “Now Denise is going to dance a tango with BOTH of her instructors (Ivan and Ruben)”! OK, so that was news to me because they have very different styles and I’d only mentally prepped for the steps I’d been trying to learn the night before with Ruben. No pressure.

If you’ve every seen the movie, The Tango Lesson by Sally Potter, there is scene where she is learning tango and she dances simultaneously with three men. It was kind of like that… well not quite, but that’s what I felt like. I began the song with Ivan and in the middle they suddenly switched and I continued dancing with Ruben. You also have to understand that this movie is one of my favorites – I mean, who wouldn’t want to tango in a big studio with three handsome Latin men?

So, did I faint, fall, throw up? No, thank heaven. Did I make mistakes? Of course. But I got applause! And roses! And people I knew and also had never met came up to me to tell me how impressive and passionate my tango was. So, this was one of those experiences that you daydream about all your life but never believe that you’ll really have (like one day I’ll win the lottery)… and it really happened. Because I finally just did it.

Originally I was going to end this post right here, but this morning I read an article in the NYT that shook me up a bit and I thought might help me make a point about why my tango experience (and all my experiences this past year) are so important to me. The article profiles Michael Blattman, who at 58 after a very successful and lucrative career, has found himself unemployed for the past 18 months. Of course it scared me… I have little idea what my job prospects will be when I return to the States. This could be me.

But what really disturbed me was what Mr. Blattman was doing with all his free time…”He can walk to shopping, but often drives his secondhand S.U.V. to a grocery store two towns away just to have someplace to go. “If I walk to the store, I’m back in 10 minutes, and then what?” Last Monday, asked what he had planned for the week, he said, “As of now, I have zero planned, not a thing.” He says that filling his days is a chore.

It really takes so little to realize our dreams… or the dreams of others. It’s awful to be unemployed, but what an opportunity to do some volunteer work between interviews, or exercise a latent talent for the enjoyment of others. I absolutely do not discount the importance a career, but it’s not the only thing that matters.