The sounds of San Miguel continued 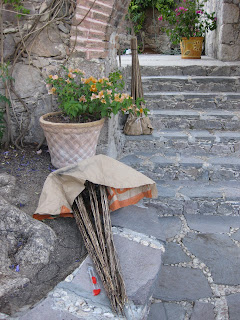 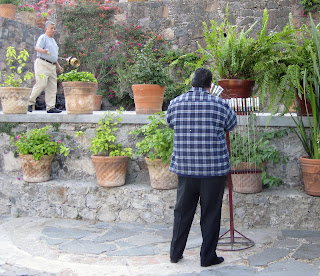 I think this will be an ongoing series – the sounds of San Miguel – which may warrant earplugs at times.

This morning at 5am, after a night of playing hide and seek with a mosquito, the explosions started. Your first thought is not panic, but rather, “oh geez, what now.” After about an hour of a series of explosions every 5 minutes or so, I figured it was either another religious celebration or they were trying to blow the snowy egrets out of the trees in the parque (which I’d read they’d tried earlier, to no avail).

The explosions continued throughout the morning, so on my way to work I decided to investigate. Fortunately, the snowy egrets were safe (though probably as bleary-eyed as the rest of us). And I was right on my second theory – bundles of rockets still waiting to be shot off were piled in the small courtyard of the little chapel on Callejon del Chorro. I asked what the fuss was about but my still limited Spanish got me as far as some sort of religious commemoration and if I liked I could join mass which was stating shortly.

Note in the photo above the man on the upper left swinging an incense holder – he’s also the gardener that waters the church plants there every morning. The guy on the right is loading up another series of rockets – they even have their own custom rocket launcher.

(Oh great…. as I write this, 12 hours from the start of the first explosions this morning, they are starting again!!!)

Aside – another sound heard on my morning walk yesterday – a mocking bird imitating the little whistle the knife sharpening guy makes as he announces his presence on the streets.