By dklar January 3, 2009 Insights
No Comments 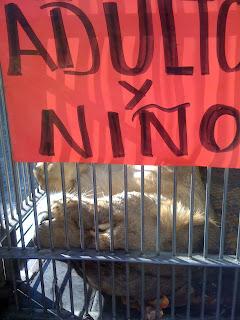 Wednesday was of course a grand New Year’s Eve celebration in the Jardin in San Miguel. Crowds of people gathered to dance to live mexican music and await the spectacular midnight fireworks display (yup, this town clearly has a little money).

They also bought handfuls of 2-foot long metal sparklers to wave around as midnight approached. Reliving childhood memories of burnt fingers, feet and clothing just from the dinky 10-inch variety (now banned in California at least), I decided to avoid that potential disaster and stayed well back from the hundreds of people wielding those lethal torches, though everywhere you stepped you’d still hear the clinking of metal under your shoes (fortunately no melted soles).
Number two on the list of “only in Mexico” was the small truck spotted yesterday in Guanajuato carrying a caged lioness, complete with megaphone advertising the local circus. 10 pesos, adultos y ninos. Perhaps the thin strip of yellow plastic “peligroso” tape would suffice to assign blame should some poor soul lose a hand (“hey, we told you she was dangerous”). At least the animal had plenty of food (as evidenced by the dozens of chicken carcasses littering her cage) and water, and seemed relatively content. Not even my iPhone in her face phased her.