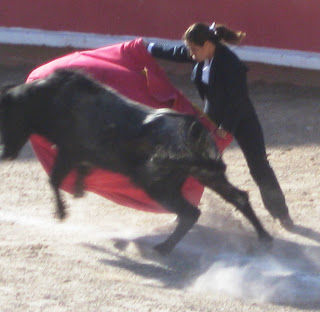 Yesterday I witnessed my second bullfight. What fun! And so much more interesting than the first one I saw in March. I’ve posted more pics on Facebook.

All four of the toreros were women – and they seemed more tenacious and more fearless then any of the men I had seen. These women were tough and their bulls were feisty, and I thought this is the epitome of the Latin woman who is brought up having to deal with Latin men – bows and braids and covered in blood, tossed and trampled, they got right back up and stood down these huge beasts without taking one step back. Bravo mujeres!
Lest you think I’ve become an addict of blood sport, the next best thing about this event was that none of the bulls were killed (at least not in the ring). While they were taunted by the picadores and blood was shed, at the end of each fight, the girl would face the bull and toss down her cape and sword, turning her back and walking away victorious. Then 6 young men strode in and wrestled the bull (more or less successfully) out of the ring.
The Festival was sponsored by one of the candidates, Lucy Nunez, who is running in the upcoming local election, and was free. The Plaza de Toros was packed with people waving the flags of their favorite candidates and enjoying a great day. We even did the wave. It was a good day to be a girl.